Tuesday was the last day of classes, so I’ve been spending the past two days just kind of recovering mentally, physically, and emotionally from this past year. It’s been a long and kind of exhausting year, but in looking back I can still say it’s been a good year, and I’m thankful to be able to say that still.

I started this year with a list of things I was going to try in my classroom and I was able to implement most things, though I’m already thinking of how to change things for next year.

Here’s how some of the structures I implemented this year in my classroom went:

There’s a lot of room for improvement for next year. And I was frustrated a lot this year- by my students, by my colleagues, by myself. It was exhausting working with the chemistry team to overhaul what I did last year to make it work better and for all of our different teaching styles. And it was strange to find myself in a leadership role among our co-planning team as a 3rd year teacher (our veteran chem teachers did not join us- one was only teaching AP chem so it didn’t apply and the other was focused on a new forensics course so didn’t have the time to co-plan, so I had the most years of experience among our group). I also started a 3 min observation club among my department, and we’re thinking of how to expand it to other departments (maybe math and engineering to start?), and it was again strange to be in a leadership/organizing role among more veteran teachers. I wanted to teach my students how to be self-competent, and I could have done a better job of this, both implicitly and explicitly this year. But a lot happened this year, and I believe despite the struggles, the frustrations, the venting sessions I had with friends to keep me sane, it was a good year. I want to keep all of these things in mind as I recharge this summer, so that I can start next year ready to change things up again to continue to improve.

And I will say (again) that the thing I love most about teaching is that it’s never the same. The students are certainly not the same, but I am also not the same teacher this year as I was last year, because I’m (hopefully) using these experiences to adjust my practice and grow. And growing (literally or figuratively) is a sometimes painful process, but so so worth it. So the exhaustion, the frustration is worth it (though I’m still trying to figure out how to balance my life so that maybe I’m just a little less tired and stressed during the school year…) I’ll just have to remember this post when I’m drowning in a sea of grading next fall…

I occasionally get this comment from students: “You grade things so quickly!” And I do try to return work quickly, because for me, the most important part of grading is the feedback, for both me and my students. But the result is that sometimes, it feels like never-ending grading. As soon as one pile is graded, there’s another stack to be tackled. I suppose this is just the life of a teacher. So sometimes I wonder if there are ways to give them better feedback without having to grade everything. (I don’t grade everything, by the way. I would go insane.) I’m a little worn out by grading right now, particularly because it’s the end of the quarter and I find myself checking and double checking the online homework sites to make sure I didn’t forget to give someone credit for an assignment they completed late. I sometimes wonder if I should be more strict about the late policy (which is officially anything over a week late is a zero, according to my syllabus), but I see zeros as overly punishing to students. Then again, their grades become a little meaningless (in terms of formative feedback) when they submit the online homework after we’re done with that unit.

Some things I’ve been trying this year to keep a handle on the grading:

Exit tickets instead of collecting/grading assignments. We go over almost everything together in class, so I found it not very useful to grade their individual assignments. These days, I’ll give an exit ticket at the end of class with problems similar to the homework, to get a check on their understanding. However, it still turns out to just give me a sense of what the table group as a whole can do, rather than what an individual student can do, because as soon as one student figures it out, s/he will help the rest of the group. I’m mostly ok with this, but I do wonder how I can give students better feedback on their individual understanding.

Online homework. I’ve been using the Quest system from the University of Texas (quest.cns.utexas.edu) to assign multiple choice review problems. Pros: students get instant feedback. Cons: online access can be an issue, also they have to sign up separately and the UTexas system assigns them an ID that they may or may not remember. Also, sometimes the question wording is not quite what I use in class. I’ve added a few of my own questions to the site, but writing/formatting questions for the Quest site is not simple and sometimes it’s just easier to pick question that are “good enough”. I changed the policy to “80% correct = full credit” because I had just been giving full credit for completion and I wanted them to actually try/think about the questions. This policy got a little pushback at first, because I assigned some question sets before we had covered the material in class, but overall I think they’re ok with it. There’s enough room for making mistakes while still forcing them to be thoughtful about their work (at least, that’s the goal).

Google classroom for lab reports. This lets me grade their lab reports in somewhat real-time (close to when we’ve done the lab), because last year I would collect their lab notebooks periodically and grade several labs at once. I also really love grading labs online because I can make comments (that are legible) and also cut & paste common comments from a running document (if I remember to start one). The downside is similar to the downside for their other online homework, because some students have hit-or-miss internet access at home (and apparently Google Classroom/Google Docs on their phones/tablets doesn’t always save properly… Still trying to figure out this particular tech issue.) I’ve made laptops accessible in my classroom and some students take full advantage of this during our academic lab block (study hall/tutoring time every other day) but other students don’t. So I have the odd result of students with ~80% in test/quizzes with 40% in homework because they never turned in their online assignments. I do allow students to resubmit lab reports for 1/2 credit back, because sometimes they just miss things (and sometimes my questions aren’t worded in the best ways), but that’s more grading for me and honestly sometimes they still miss the point on the second attempt. I wish there was some way I could get them to really read and absorb my comments (or ask me if it doesn’t make any sense). Or even just read the rubric that’s added to the bottom of their document (I love Goobric, by the way. Makes my life so much easier in terms of grading online work.)

Spiraling quizzes that are graded SBG-style, where content shows up on multiple quizzes. I like this because it shows me whether they’ve retained the information or not, but then I wonder how useful the spiraling is because we’ve often moved on in the unit and don’t always refer back to the beginning material. So I wonder if our units should be better designed (but then, how?).

I also recently allowed test corrections on our most recent unit exam. I have mixed feelings about test corrections, because (like the exit ticket issue) most students can do the work with help but may struggle to do it on their own. My averages for the first test were lower than I would have liked and the test was worth a lot, so I allowed students to come in during academic lab (our bi-daily study hall/tutoring block) to correct their exams for 1/2 credit back. Most students struggled on the multiple choice (which I’ve found is pretty typical), and I realized as students were doing their corrections that the multiple choice emphasized concepts that I didn’t in class. It was a common unit exam, and some things tripped up my students that just didn’t occur to me as I looked over the test questions. (For example: under “select all that apply” for beryllium, students only selected “alkaline earth metal” instead of also selecting “metal”. In retrospect, I don’t really like that type of question because it feels a little like a trick question, and there were a fair number of them on the multiple choice.) And then so many students showed up for one ac lab period that I ran out of seats, and again I had a pile of grading. On the plus side, I think it really made students think about what they missed on the unit exam, which will hopefully help them for finals.

The grading thing is a constant tension for me- how much to grade so that I keep sane but still give meaningful feedback. How to assign points when points seem so arbitrary sometimes. And how to help students see their grades as sources of feedback rather than a value judgement on them as people. I’m trying these unit tracking sheets for students to fill out after every quiz. Not 100% sure it’s useful, but maybe? 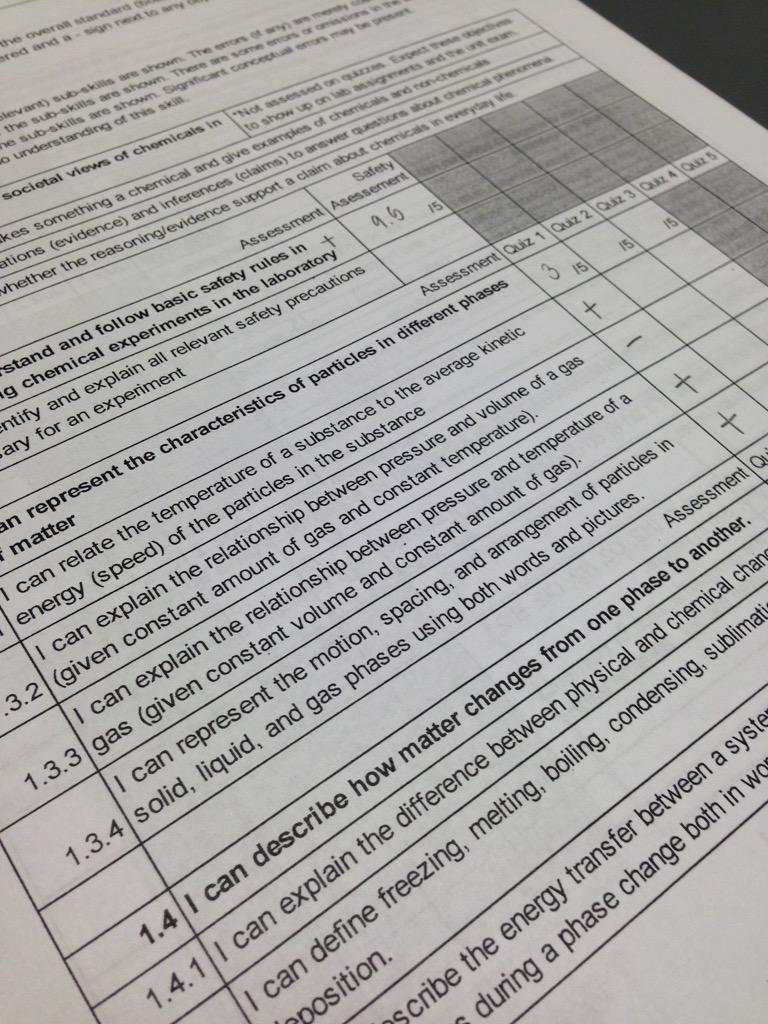 There are aspects of my grading policies that I really like (giving students feedback, allowing them opportunities to resubmit and show improvement) and aspects that I’m not so sure about (being super lenient with late work, having to regrade assignments that have minimal thought put into the second attempt, trying to get students to think more about the feedback and less about the grade itself). Still thinking these things through. I’ll probably try something else mid-way through the year, and luckily most of my students will come along for the ride without too much complaining. I continually wonder how I can make the grades more about mastery, learning, and improvement, rather than just a grade.

Classes start tomorrow, “officially” launching my third year teaching. While I find myself with some anxiety about tomorrow (did I plan everything? Do I have enough time for what I want to do? Or not enough time? Did I get all my materials? Did I forget to copy something? How do I pronounce their names?), overall I’m looking forward to this school year. This is the first year I’ve been able to focus on a course that I already taught once, so I get the chance to tweak things, which is exciting.

Some things that I’m trying/tweaking:

And then, as last year, I’m incorporating POGILs (modified, sometimes taking out some of their paper-based models and replacing with a hands-on model) and Chemistry Modeling Instruction and other random things to get at content. (By the way, I’m really sad that chemthink.com seems to be down, possibly long-term. If anyone has another, similar resource, I’d love to hear about it.) This year I also want to see how the structures I put into place help students really interact with the content. How do I support groupwork to help their groups function well, and how do I help students see learning as a progression?